In the March 2013 issue of Western Journal of Emergency Medicine, Dr. McKaigney highlights a case that illustrates there is more to a thoracic and right upper quadrant bedside ultrasound study than just free fluid, renal and gallbladder evaluation. You must look everywhere and appreciate when something looks abnormal. I always say, know what NORMAL looks like, because when you see something abnormal, you’ll identify at least that, then want to find out what that abnormality is by further testing.

The case: “A 35-year old male presents to the emergency department (ED) with what he describes as right-sided upper back and flank pain, which he attributes to a “cupping” procedure the day prior. The cupping procedure is an alternative medicine practice that uses local suction to theoretically stimulate blood flow and promote healing. He had no previous issues with the procedure. On further history he reported having had approximately 6 weeks of intermittent fevers, cough, anorexia and general malaise. He had seen multiple naturopathic physicians for these complaints, before an urgent care visit one week earlier. At that time, he had been started on azithromycin and doxycycline for a presumptive diagnosis of pneumonia. In the interim week he reported an improvement in his febrile symptoms and overall well-being. He was an otherwise healthy heterosexual male, without drug use or travel outside the country. He had no known sick contacts.

On physical examination his vital signs included a blood pressure of 116/75 mmHg, a heart rate of 119 beats per minute, and a respiratory rate of 20 breaths per minute. His temperature in the ED was 36.2°C. Oxygen (O2) saturation was 97% on room air. The patient was alert, and appropriate with no signs of respiratory distress. Pertinent physical findings revealed typical, non-tender cupping marks on his back. More concerning was an absence of breath sounds on the right side of the chest on auscultation. His abdomen was soft and non-tender. The remainder of the physical examination was non-contributory.

The initial diagnostic test ordered was a chest radiograph, which showed 80% opacification of the right hemithorax, consistent with pneumonia and associated parapneumonic effusion seen in Figure 1. A bedside ultrasound was subsequently performed in the ED, initially in order to examine the size of the pleural effusion in which a startling discovery was made…..” 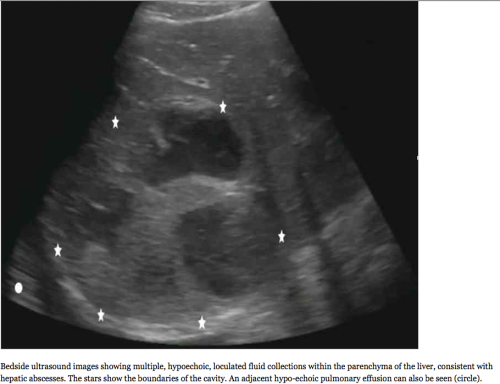 So, “what is that?” – you may be asking…. and what happened to the patient, what can be done about it, and what is the evidence based review on the topic? Read on as Dr. McKaigney does an excellent job in discussing it all….here

In the most recent issue of EPMonthly, our good friend, Dr. Teresa Wu, and Brady Pregerson right up a case they had of a patient with abdominal pain. In their wisest and most sarcastic way, they present this case with a great teaching point (ok, there are many teaching points as you will find on the last page of the case – but one in particular that deserves special mention). Read on and see if you can get what that point may be…

“56-year-old otherwise healthy female who presented to the ED with a chief complaint of “severe abdominal pain” after she finished lifting boxes of heavy books at her job the day before. She states her pain is worse with movement and is better when she lies still. She has never had pain like this before, and today, it is 10 out of 10 in severity. The pain is described as sharp and tearing, but it does not radiate to her chest or back. She has no other associated symptoms, and she has tried Ibuprofen without any relief.

Her vital signs are all completely within normal limits and her physical exam is only remarkable for tenderness to palpation over her left rectus muscles, and a seemingly pulsatile aorta palpable through her thin abdominal wall. She has no rebound or guarding on abdominal exam, and she has no other abnormal findings. Given her symptoms and her palpable aorta, your senior resident decides it would be prudent to do a quick scan of her aorta to make sure nothing catastrophic is imminent.” The following image was obtained:” 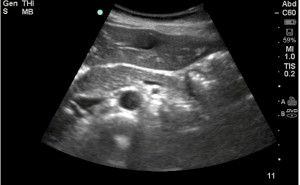 The Aorta seems ok. Hmmmm…..Still wonder what happened to the case and what it was? Read the issue in depth and you’ll then get to know and love Teresa Wu as much as I do.

Hint – look at the entire screen when evaluating any organ by bedside ultrasound…..