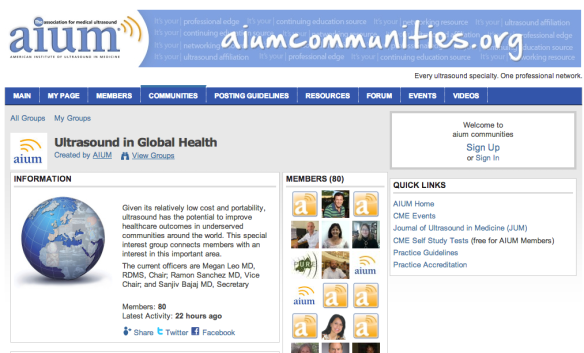 For those of us who travel, teach, and spread the gospel of ‘sound – we look for resources that may help in knowing the conversation for this topic. AIUM has a page that could help in your needs, as well as see photos of trips that their physicians have undertaken for ultrasound teaching and advancement.

Ive posted on other groups that have gone all over the world, in addition to my own experiences – including TO-theWorld who enhanced maternal education and minimizing MTFT of HIV.

For other resources, that are free for ultrasound in global health:

Here’e a video that discusses ultrasound in global health, with a cameo photo of our own Dr. Jessica Ngo using it during Stanford’s emergency response to Haiti after the disaster with our SEMPER team.

A friend of mine, William Cherniak – a family medicine resident in Canada at the University of Toronto-  has been working on a project. Not just any project, but a global impact project with the help of KIHEFO (Kigezi Healthcare Foundation) and his own group that he created called TO-the World. What is this project, you ask? Well, it was to show how minimizing maternal to child transmission (MTCT) of HIV can be helped by simply having and letting the women know in the region that a portable ultrasound has arrived. This project will be presented at Global Health 2013 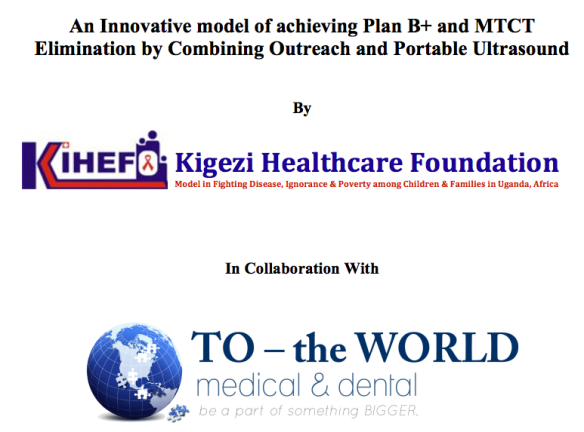 The WSJ actually spoke of what happens when an US machine is taken to a developing country – more antenatal visits!

Here is the video William made to support his cause:

I saw an interesting blog post, sent to me by my ultrasound uncle, Dr. Chris Fox, that was on the: “Why Is American Healthcare so Expensive?” site entitled “How to Make Ultrasound gel: which is also sterile and edible and environmentally friendly” by Dr.Janice Boughton. Not only did the title catch my eye, but the content drew me even closer. If you are in need of gel – whether that’s because you are doing global health, disaster relief, or healthcare at any resource-limited area – there are ways to make it. Ive heard of a couple alternatives – and here is a way to make your own – that is also sterile, edible, and environmentally friendly. 🙂

As the blog post states: “Ultrasound requires an aqueous interface between the transducer and the skin or else all you see is black. Ultrasound gel is a clear goo, looks like hair gel or aloe vera, and is made by several companies out of various combinations of propylene glycol, glycerine, perfume, dyes, phenoxyethanol or carbapol R 940 polymer along with lots of water.” – not easy to find, and ot so cheap either. So, she set out and tried six different recipes – yup, that’s right – SIX! …and made the below gel (see pic) from guar gum (found in the flour section of stores), salt and water:

“Guar gum is available in the flour section of many grocery stores and costs about $10 for a 220 gram bag. It is purported to be good for diarrhea, constipation, diabetes and lowering cholesterol.” – how cool is that?!

1. Mix 2 teaspoons of guar gum with 1-2 teaspoons of salt. (The amount of salt isn’t vitally important since it is just added to keep the guar gum from clumping. Using slightly less than a teaspoon of salt per 2 cups makes a gel with which is isotonic, which would be ideal for use near eyes or other mucus membranes or on open wounds).

3. Slowly sprinkle the guar gum/salt mixture into the boiling water while stirring vigorously with a fork or whisk.

4. Boil for about 1-2 minutes until thick and well mixed.

5. Cool before using. Save lives.

To read more about her plight – click here. Thanks Janice!

Below is a video on how to do it made by her too:

World Humanitarian Day is August 19th. Travelling to a third world country is what all healthcare providers should experience, as it will make a difference (to either your perspective on life and happiness or to the people who you treat). I have met some amazing people along the way, none who affect me more than those who live there (and the great way they define happiness) and those who go around the world to try to make it a better place. I have travelled to the Middle East, India, Guatemala, Honduras, Mexico, and Nepal with groups of people who have done far more than I could ever do, and the inspiration I get from them is amazing (Stanford International EM facebook page and the Rwanda PURE initiative). The stories I’ve heard, the experiences I went through, and the humbling that comes from it all are what keep me going. But, Ive realized something: there are two ways of thinking about global health and our aid efforts: END_OF_DOCUMENT_TOKEN_TO_BE_REPLACED