It’s here! SonoDoc: A fun, online game to learn bedside #ultrasound in a case-based way. Learn #POCUS indications, how to’s, integrate into case mgmt, how to use it for next steps/dispo. Play FREE or Stanford CME ($25). HUGE thanks to many folks for authoring cases/beta testing/feedback/support. 5 years in the making, and so happy to share it with you all. Enjoy! http://sonodocgame.com

In case you all were unaware, Dr. Kasia Hampton is REALLY into ultrasound. She is a resident in emergency medicine and is teaching her colleagues how to use it. She has case after case of great findings, quick pick-ups, and lives saved and management changed due to that little old ultrasound machine. She even has another twitter/blog, called @tres_EUS  – a site for residents interested in ultrasound cases/leadership/research/etc. She emailed me this case that I thought was a fabulous use of ultrasound and actually shows what I harped on and on about with EMCrit on a recent podcast on FAST scans highlighted in our SonoTips and Tricks on FAST scan upper quadrants.

“25 yo male was found unresponsive per bystanders. Upon EMS arrival he was noted to have multiple stab wounds to the upper extremities and chest. Initial set of vitals revealed tachycardia without hypotension. Patient was intubated at the scene “for airway protection”. Mechanically ventilated upon ED arrival with the following vitals: BP 135/90 mmHg, HR 105 BPM, respirations 16/min, SpO2 100%, T 35.8 C. GCS 3T. During secondary survey found to have one stab wound to the left anterior chest (inferior to the nipple), and second stab wound to the right posterior chest (lateral to the inferior aspect of the scapula). Additional two stab wounds to both shoulders were superficial and were no longer bleeding. No apparent abdominal (wall) injuries were noted. Abdomen was non-distended and soft. 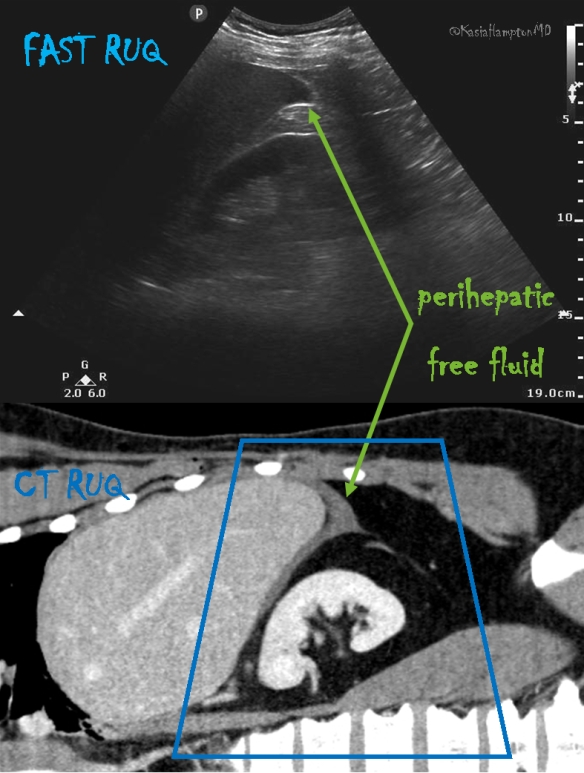 FAST ultrasound evaluation was performed after the patient was log-rolled in both directions – first to the left and then to the right.  Subsequently the patient was taken to CT scan. He remained hemodynamically stable. Below the comparative findings of FAST vs CT scans.

Given stab wound to left anterior chest with presence of free fluid in the abdomen (with hepatic and splenic injuries identified on CT), patient was taken to the operating room. Injury to pericardium itself without pericardial effusion was suspected on CT. During the surgical exploration it appeared that the stab wound to the left chest only nicked the pericardium (no blood within pericardial sac), while penetrating the left diaphragm, left lobe of the liver, stomach, spleen and pancreatic body.

In this particular case I wonder if the trace perisplenic free fluid would have been identified on FAST performed before log-rolling? Additionally, it is quite amazing how misleading was the clinical secondary survey in comparison to FAST findings and intra-operative discoveries. “